With winter quickly approaching, many animals find natural food sources scarce. This DYI Birdseed Ornament is a craft that’s not only fun to make, but great for your backyard animals as well!

What you will need: 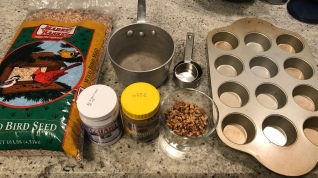 END_OF_DOCUMENT_TOKEN_TO_BE_REPLACED

Unlike its counterpart the white stork, associated with the mythology of bringing babies, the marabou stork’s unruly appearance and unsettling scavenging behaviors make this bird the center of death folklore.

The marabou stork is a unique species of bird. Known for its large stature, its long, hollow legs, large beak, and a droopy, pink wattle, the purpose of which is strictly for show, many would consider the marabou stork an unappealing animal. In spite of not having any feathers on their spotted head or legs, their bodies are covered in dark grey feathers. Unlike the traditional stork mythology, the marabou stork is associated with death rather than the bringer of babies. Sometimes called the undertaker bird, African folklore says this awkward looking stork was created by God out of remaining bird pieces when he ran out of animal parts; this is why its appearance is so unpleasant. Although unique looking, these birds have many fascinating characteristics.